Stefano Torossi on 45, Pt II: Five A-sides from the 1960s featuring The Flippers, Tony Del Monaco, I Crazy Boys, I Balordi, and Louiselle

Although the majority of Stefano Torossi’s extensive musical catalog from 1959 to the present is in the album or long play format, he has also done a number of 45s, most of them released initially in the 1960s on labels including CAM, Carosello, CBS, Costanza Records, Durium, Italfon, Parade, and RCA.

The second installment of this overview of 45 singles involving Stefano Torossi showcases five A-sides he co-wrote between 1960 and 1968.

The first 45 singles of Stefano Torossi in Italy were both done in 1960. He was given co-writing credit for The Flippers’ A-side “Santa notte e Cha Cha Cha,” and did arrangements for “Bianco natale Cha Cha (White Christmas)” on the B-side. Torossi also co-wrote “Non gridar bambina” with Prosaico (an alias of Sergio Jacquier).

The Flipper players depicted on the sleeve include, starting from the left, Franco Bracardi, Fabrizio Zampa, Max Catalano, Romolo Forlai, and Stefano Torossi.

An audio file of The Flippers’ “Non gridar bambina” composed by Prosaico and Stefano Torossi, with Romolo Forlai on vocals, is here:

In 1962, Stefano Torossi appeared on the first of at least three singles by Italian pop singer Tony Del Monaco including “Il grembiule nero” / “Baila con migo,” both co-written by Torossi. 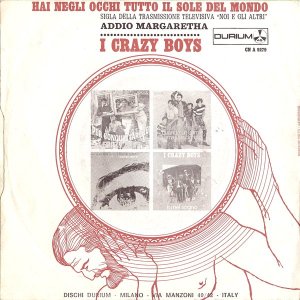 Each side of the I Balordi 45 also appeared on the Magic Bitpop Vol. 3, a 1960s pop music compilation CD by Italy’s On Sale Music label.

As part of Stefano Torossi’s original soundtrack for the film L’età del malessere, singer Louiselle released a 45 single on Parade Records that features “Ancor no,” written by Torossi, Audrey Nohra Stainton, and Federesco. This haunting vocal is one of this site’s favorites from the more than a dozen soundtracks composed by Stefano Torossi.