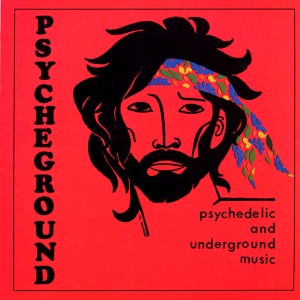 Side A of the one-off album by The Psycheground Group has two tracks, “Psycheground” and “Easy,” while Side B has three: “Traffic,” “Ray,” and “Tube.” The LP has been reissued in vinyl by Cinedelic Records in 2008 and CD by AMS in 2009. 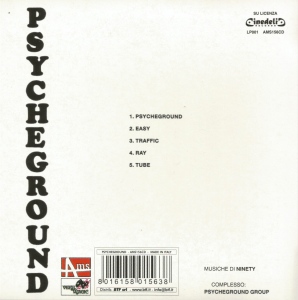 The Psycheground Group’s opening track “Psycheground,” composed by Ninety (aka Gianfranco Reverberi), is on YouTube:

According to Discogs.com, in addition to Ninety (aka Gianfranco Reverberi), Sandro Brugnolini, Massimo Catalano, and Stefano Torossi are uncredited composers on the album. 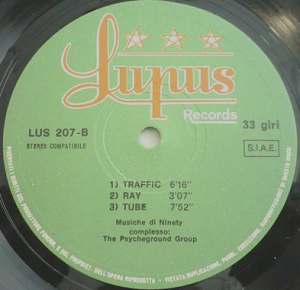 It’s not clear if these writers really participated in making the album, or signed these compositions for promotional purposes, a frequent practice in this time period that also forced many artists to use one or more aliases. 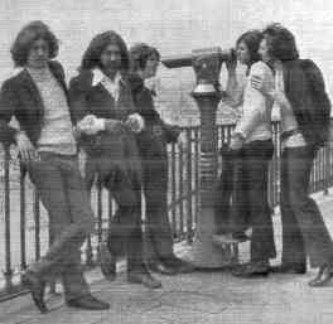 Nuova Idea in the early 1970s (photo from Discogs)

A fan-made video for The Psycheground Group’s “Traffic,” a classic composition by Ninety (aka Gianfranco Reverberi) that is the first track on Side B, is online:

A pair of tracks from the album, “Ray” and “Psycheground,” also appeared on the promotional compilation Oggi & Domani, released by Leo Records released in 1971. 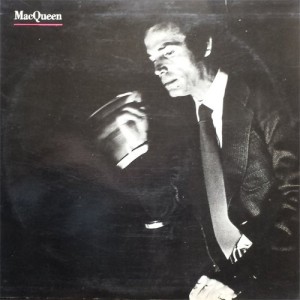 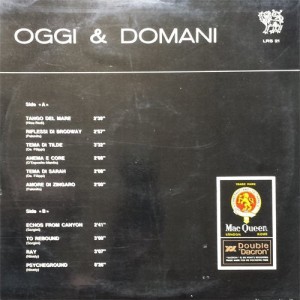 The Psycheground Group’s “Ray,” composed by Ninety (aka Gianfranco Reverberi) and performed by the musicians of Nuova Idea, is here:

“Easy” and “Tube,” the remaining two tracks from The Psycheground Group’s Psychedelic And Underground Music, are usually not hard to find on the Internet. 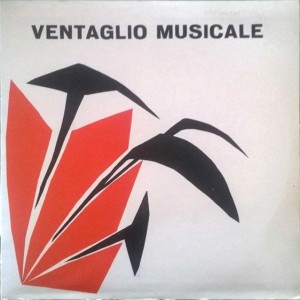 Is this an outtake or leftover track from Psychedelic And Underground Music featuring the musicians from Nuova Idea? This correspondent has not been able to find any information about this although the fact it is much bluesier than four of the five cuts on the debut album could indicate it didn’t fit for continuity or thematic reasons. Another idea is that the cut is an extended take from a recording session for the album’s penultimate track “Ray,” the only blues rock-oriented cut to make the final track list. A final theory is due to the long running time of the track, there wasn’t enough space for it on the LP. 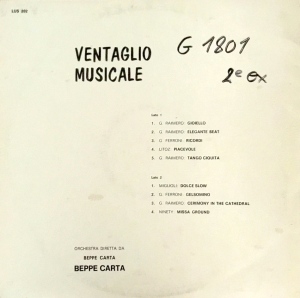 Regardless of the reason for omission, if “Missa Ground” were an unused track from the recording sessions for Psychedelic And Underground Music, then it would have been impossible to release contractually on the The Psycheground Group’s follow-up album, War In The Night Before due to the fact the final album came out on Tickle rather than Lupus Records.

As in the case of The Psycheground  Group album, Sandro Brugnolini, Massimo Catalano, and Stefano Torossi are also listed as uncredited composers for this piece by Ninety, better known as Gianfranco Reverberi. Ninety’s “Missa Ground” is on SoundCloud:

Gianfranco Reverberi’s The Underground Set & War In The Night Before

A year before The Psycheground Group, Gianfranco Reverberi composed the music for The Underground Set, another album that was performed by the musicians from Nuova Idea, including Ricky Belloni, Enrico Casagni, Claudio Ghiglino, and Paolo Siani. 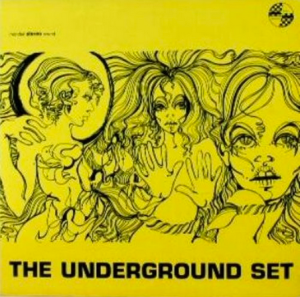 The eponymous album was the first of two full length LPs and at least four singles released under the name The Underground Set. The band also used the names Hot Underground Group and Unito e Gli “Optiamo” for two singles. All of the music was recorded and released between 1970 and 1971. 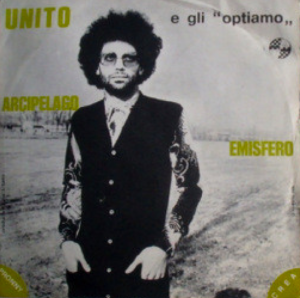 Unito e Gli “Optiamo” was an alias used for a single on Radio Records in 1970 that included “Arcipelago” on the A-side and “Emifero” on the B-side. It was the second single released with “Arcipelago” as the A-side the same year, the first was credited to The Underground Set. 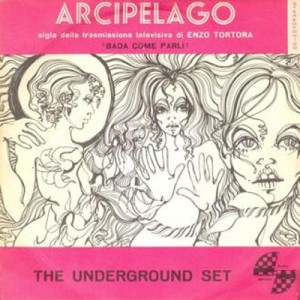 Unito e Gli “Optiamo” aka The Underground Set’s 1970 single “Arcipelago” is on YouTube:

“Emisfero” was also released earlier in 1970, again by Radio Records, this time as the B-side of their “Tanto per cambiare” single. Nuova Idea were the performers on all the singles. 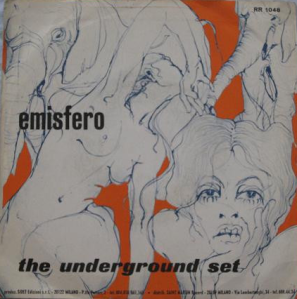 The Underground Set’s “Arcipelago” is also the opening track on The Underground Set–as well as a bonus track on their second album, War In The Night Before (along with “Emisfero” and four other singles released by Tickle in 1971, and reissued in CD and vinyl by Cinedelic Records in 2016). 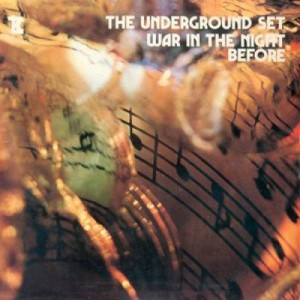 The Underground Set – War In The Night Before (1971) Tickle

War In The Night Before, the second album by The Underground Set, was again performed by an uncredited Nuova Idea, composed and produced by Ninety (aka Gianfranco Reverberi). The dozen cuts on the original Tickle release are heavier than those on their first LP, adding more of a bluesy edge yet retaining the distinct psychedelic, prog rock and jazz-funk elements.

The title track from The Underground Set’s War In The Night Before is online:

Among tracks released as singles from the second album were The Underground Set’s “Una lettera,” with “Libitum.” 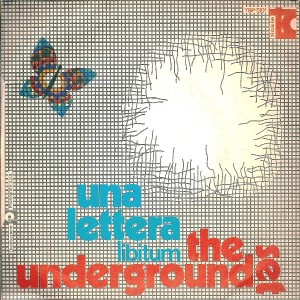 Another single from the album, “Motor Road Underground,” backed with “Slaughter On The Motor Road,” was used as theme music for an 18-episode National Road Safety Campaign in Italy in 1970. 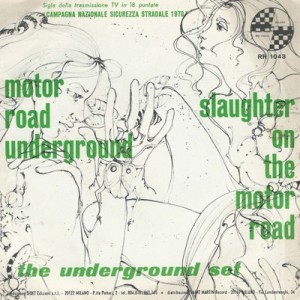 The Underground Set’s “Motor Road Underground,” composed by Ninety (aka Gianfranco Reverberi), is on YouTube: 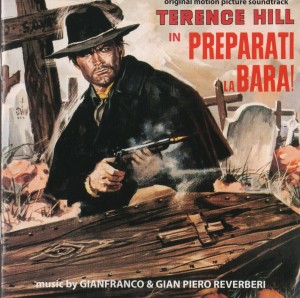 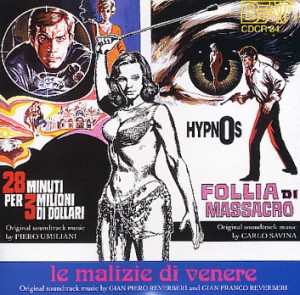 In 2005, “Last Man Standing” was sampled by Gnarls Barkley for “Crazy,” one of the biggest hits of the last two decades. Gnarls Barkley (aka Danger Mouse and CeeLo Green) used parts of the main melody and chord structure from the Gianfranco and Gian Piero original composition on the world chart topper from their St. Elsewhere album. 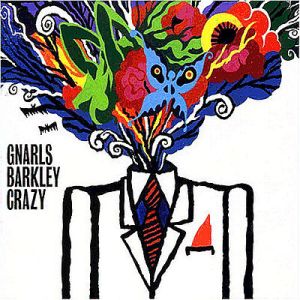 Gnarls Barkley (aka Danger Mouse and CeeLo Green)’s “Crazy” is on YouTube: 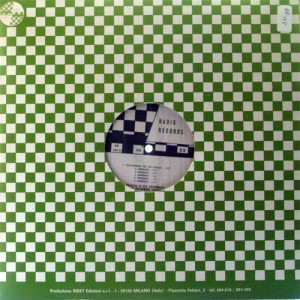 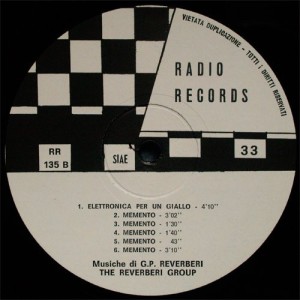 The Reverberi Group includes five versions of Gian Piero Reverberi’s “Memento” on Side B including one that has been uploaded to YouTube:

The performers on The Psycheground Group and The Underground Set albums, according to several sources online, are Nuova Idea, a progressive rock band from Italy that, for contractual reasons at the time, could not use their real name. Band members who played on the three Gianfranco Reverberi albums include bassist and flute player Enrico Casagni, guitarist Claudio Ghiglino, drummer Paolo Siani, keyboardist Giorgio Usai, and guitarist Marco Zoccheddu. 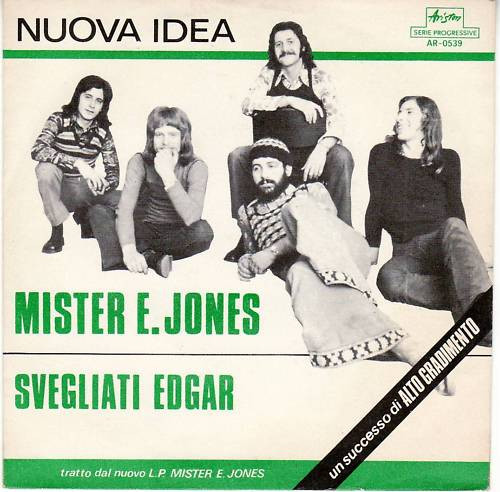 Besides the albums with Gianfranco Reverberi, Nuova Idea released three LPs under their own name between 1971 and 1973, as well as appearing on a 1971 compilation.  Reverberi produced each album. 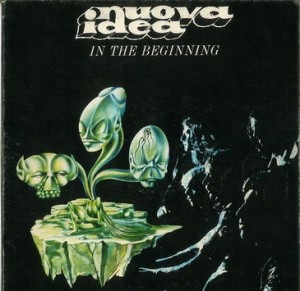 The albums include In The Beginning in 1971, Mr. E. Jones in 1972, and Clowns in 1973, all three originally released on Ariston and most recently reissued by Sony Music. 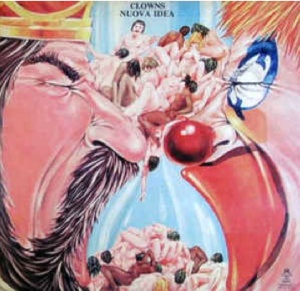 The title track from Nuova Idea’s Mr. E. Jones album is on YouTube: 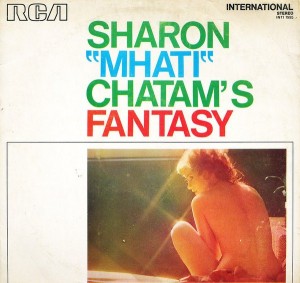 Reverberi produced the collection of original compositions and pop music covers, which has just been reissued in vinyl by Cinedelic Records, including a digital download code. 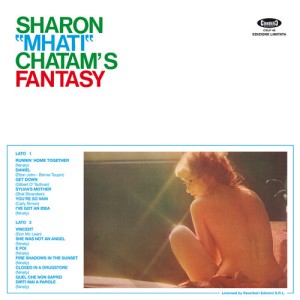 Sharon”Mhati” Chatam’s “I’ve Got An Idea,” composed by Ninety (aka Gianfranco Reverberi), has recently been uploaded to YouTube:

An online sampler features a dozen tracks from Gianfranco Reverberi released between 1968 to 1973, including half with brother Gian Piero Reverberi, starting with “Last Man Standing,” an original composition from Ferdinando Baldi’s Preparati la bara! (Django, Prepare a Coffin aka Viva Django) soundtrack plus five from The Reverberi Group. 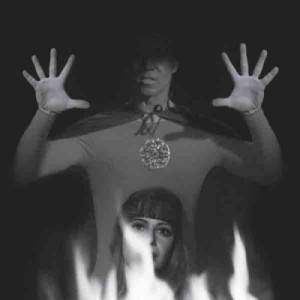 Two–or possibly three–tracks are by The Psycheground Group from 1971, performed by Nuova Idea, two by Sharon “Mhati” Chatam from 1973, and the title track for Renato Polselli’s The Reincarnation of Isabel soundtrack from 1973 (reissued as the B-side of a vinyl single by Finders Keepers Records in 2013):