In the early to mid 1970s, Beppe Carta and Stefano Torossi released Fantasia Musicale, their third album for Italy’s Metropole Records. Composed by Torossi and directed by Carta, the limited release LP features eleven tracks of classical and jazz music intended for use on radio, television, and film.

The original compositions by Stefano Torossi on Fantasia Musicale include several waltzes (“Valzer per Angela,” “Un valzer per te,” and “Valzer di flauti,” a tango (“Violin tango”), and a pair of New Orleans jazz-inspired pieces, “Perla Dixie” and “Perle e champagne,” in addition to “Marcia per un clown,” “Smagliante,” “Nerina,” and “Incontro.”

An audio file of Stefano Torossi’s “Nerina,” the third track on Fantasia Musicale, is on SoundCloud:

Like the other four LPs Stefano Torossi made for Metropole Records in the same time period, Fantasia Musicale has never been reissued or released in any other format, thus making a copy of the album near-impossible to find four decades after release. 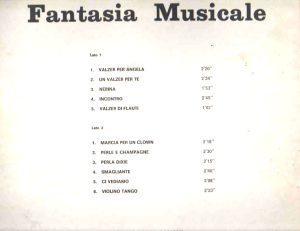 Note: If any legal rights holders object to the posting of these rare, out of print, and unavailable tracks ripped from this correspondent’s personal collection, please drop a line and they will be removed immediately.

In the last couple of years, if not earlier, information has appeared on the Internet indicating Fantasia Musicale was part of a special promotional giveaway for select customers.

The “Ellesse presenta” album sleeve indicates the album was part of a Double Dacron-branded release, which did occur in this time period for several prominent composers. However, when asked about this recently, Torossi commented:

The only precise answer I can give you is: yes, the first is the one and only cover I remember for Fantasia Musicale.

The other pictures are totally new to me, and moreover I don’t see the connection with the ad for Double Dacron.

An audio file of Stefano Torossi’s “Ci vediamo,” the tenth track, is on SoundCloud:

Beppe Carta and Stefano Torossi’s Ora Beat! is highly collectable and will cost at least 100-150 euros, if you can find a copy–one of the best places to look is Discogs. However, one album cut is online, “Pocket.”

It seems none of the tracks from Beppe Carta and Stefano Torossi’s Musica per tutte le età, another album of waltzes and tangos in the vein of Fantasia Musicale, is available anywhere at this time. 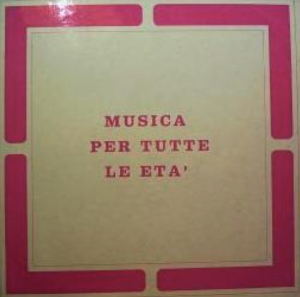 The second, the first installment of Metropole’s series of Telemusica LPs, features more than thirty short compositions from Stefano Torossi including the following four posted on SoundCloud. Released in the early 1970s, these vinyl LPs are also out of print and difficult if not impossible to find.

Stefano Torossi’s “Ginnastica,” “Appena in tempo,” “Cori a casa (I vers.),” and “Automobilista A” are here: