Originally released as an LP in Italy in 1972, the soundtrack was reissued in vinyl in Japan in 1993 and then in CD for the first time in 2012 by Italy’s Beat Records Company, the same label that issued the original LP.

“Cheops And Nefertiti,” the sixth track which also includes the choral work of I Cantori Moderni di Alessandroni, is on YouTube:

Although the work of both De Gemini and Torossi, the latter does not appear on the credits due to an agreement with RAI at the time. The Si può fare molto con sette donne soundtrack includes eight original tracks plus another seven alternate versions including “What Is This Love,” “Omar Khayyam,” “Sphinx Show,” “Bossa Beat,” “Cos’e’ l’amore,” “Cheops And Nefertiti,” “Cairo Night,” and “Neapolitan Show.”

After the initial release of Si può fare molto con sette donne by Beat Records Company, a label founded by Franco De Gemini in the early 1960s, Seven Seas reissued the album as an LP in Japan in 1993. In 2012, the full version of the original De Gemini-Torossi soundtrack was finally released–space limitations prevented this earlier, along with some alternate takes that had never been available before. 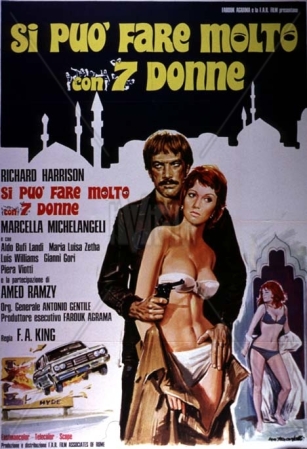 “Bossa Beat,” the fourth album cut which is credited to De Gemini and Alessandro Alessandroni, another key contributor to the soundtrack, is here:

The track, unlike the album it is drawn from, credits both composers Franco De Gemini and Stefano Torossi, as well as lyricist Giuseppe Cassia, vocalist Melody, and orchestra leader Arthur Orlandy (which is not an alias of Stefano Torossi regardless of what some sources indicate).

“What Is This Love” also appeared on Franco De Gemini’s The Man With The Harmonica album.

Perhaps his most famous performance came three years before composing Si può fare molto con sette donne when he played harmonica on Ennio Morricone’s Once Upon A Time In The West soundtrack in 1968. Gemini’s performance of “Man With A Harmonica” helped create the signature sound of 1960s and 1970s Italian Westerns that fans around the world still identify with nearly half a century later.

A short medley of tracks featuring Franco De Gemini’s haunting harmonica has been uploaded to the Internet:

“Il cielo negli occhi,” a track from Sei lellato amico, hai incontrato Sacramento featuring the vocals of Edda Dell’Orso and the harmonica of Franco De Gemini, is on YouTube:

“Beat 700,” another tune from Franco De Gemini’s Man With A Harmonica, featuring Alessandro Alessandroni, is on SoundCloud:

In 1966, Franco De Gemini was featured on the soundtrack for Navajo Joe, an original soundtrack by Ennio Morricone that was initially credited to Leo Nichols due to legal restrictions at the time. Director Sergio Corbucci’s Western stars Aldo Sambrell, Nicoletta Machiavelli, Fernando Rey, and Burt Reynolds in his second role as a lead. Reynolds later went on record to say it was his worst film experience ever… This author found the action-packed movie totally entertaining and enjoyable–the DVD can be purchased online for a modest sum.

The soundtrack, which features parts 1 and 2 of Franco De Gemini’s “Navajo Harmonica,” was reissued by Film Score Monthly on CD in 2007 and is still available at Amazon and most retailers specializing in soundtrack and classic library music. The little-known masterwork composed and conducted by Ennio Morricone features lead vocalist Gianna Spagnulo on the majority of the tracks.

A final treat is a clip of Franco De Gemini playing “Once Upon A Time In The West” live with Mi Loco Tango around 2012: