In 1968, Stefano Torossi composed the music for director Giuliano Biagetti’s L’età del malessere (The Age of Malaise), the sixth of ten full length original soundtracks he did for films between 1963 and 1969. The original album, featuring I Cantori Moderni di Alessandroni on the title track, with Edda Dell’Orso, also has a second composition that showcases Dell’Orso as a solo vocalist as well as alternative versions of both cuts. The LP was released on Italy’s General Music in 1968 and reissued in CD for the first time by Japanese label Verita Note in 2010. The CD reissue includes an amazing outtake of the theme which contains Edda Dell’Orso’s solo vocal track as well as an alternative version of the second track featuring the legendary soprano singer.

Filmed in Italy, the actors include Eleonora Rossi Drago, Gabriele Ferzetti, Haydée Politoff, and Jean Sorel. Fellow cinephiles will recognize Drago and Ferzetti from Michelangelo Antonioni’s 1955 movie Le amiche; Ferzetti also starred with Monica Vitti in Antonioni’s L’avventura in 1960. L’età del malessere was written by the director, Giuliano Biagetti, with Luciano Lucignani and Dacia Maraini, based on a screenplay and story by Maraini.

Stefano Torossi conducted the music on the soundtrack and directed I Cantori Moderni di Alessandroni, a choir that included Edda Dell’Orso among other talented members, on the title track that opens and closes the album. The composition is identified simply as “Malessere” on the LP and CD. Edda Dell’Orso also provides solo vocals on two versions of “Una certa età.”

A video for Stefano Torossi’s “L’età del malessere (Main Theme),” with Edda Dell’Orso on vocals, was recently uploaded to YouTube:

This track also appears on The Best Of The Italian Film Music (2002) CD released by Italy’s Digitmovies.

Various Artists – The Best Of The Italian Film Music (2002) Digitmovies

An instrumental version of the title song appeared on The Beat, The Shake And The Lounge 2 (2001) CD and download compilation from Italian record company GDM Music. 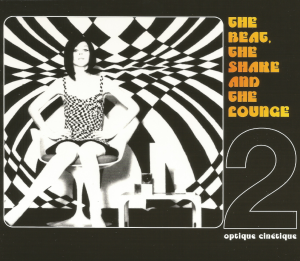 Various Artists – The Beat, the Shake, and the Lounge 2: Optique cinétique (2001) GDM Music 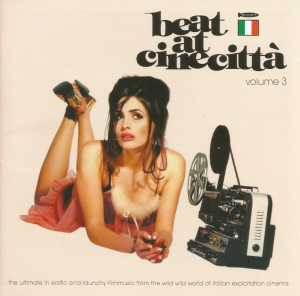 The CD reissue of Stefano Torossi’s soundtrack on Verita Note features the sixteen cuts in stereo from the original LP plus another twenty alternate mixes and film versions including a third version of Edda Dell’Orso’s solo vocals on “Una certa età” and an outtake of her solo vocal on the theme track.

Stefano Torossi on Making the Album

Stefano Torossi recently answered a few questions about the making of the L’età del malessere soundtrack. 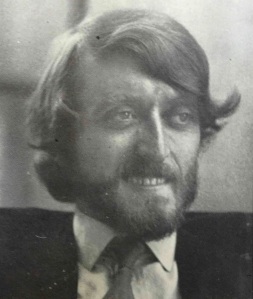 Stefano Torossi from the LP back cover

What do you recall about the three compositions with vocals: “Malessere,” “Una certa età,” and “Love”? Is that Edda Dell’Orso on “Love”?

“Una certa età” is Edda. As for “Love” I vaguely recall having a black American lady in the studio, who was probably a jazz singer passing by. I don’t remember much else about that.

Was this done in 1968 when the film came out or earlier? How long did it take to compose?

The music was composed for the film in 1968, and I’m sure it didn’t take more than a couple of days to record.

The back sleeve mentions Robby Poitevin? What was his role on the album?

The orchestra was conducted by Robby Poitevin, a French musician who worked very briefly in Italy, then disappeared.

What was the set-up regarding the 45 single featuring vocalist Louiselle that Parade released from the soundtrack of L’età del malessere?

Louiselle is someone I met only on the occasion of the recording session.

More information about this album is found on Discogs. Currently, it can be purchased from several retailers at Amazon Japan and CD Japan.

Stefano Torossi’s “Luce spenta,” the third track on Side 2 of L’età del malessere, is here:

Louiselle’s “Ancora no” was also used in the L’età del malessere film but not included on the soundtrack album. This 45 single lists Stefano Torossi as a composer, along with Nohra and Federesco.

One year after Edda Dell’Orso and Stefano Torossi worked together on L’età del malessere, she sang the title track on Ennio Morricone’s soundtrack for the Giuseppe Patroni Griffi film Metti, una sera a cena.

Stefano Torossi was also busy in 1969, not only composing the soundtrack for Vittorio Sindoni’s Italiani! È severamente proibito servirsi della toilette durante le fermate (Italian! It is Strictly Forbidden To Use The Toilet During The Stops!), but also appearing as an actor, with Silvia Dionisio, Franco Acampora, and Sandro Dori.

Alessandro Alessandroni and Stefano Torossi’s “Lungomare,” the opening cut on Fischio in armonia, is here:

The next year, I Cantori Moderni di Alessandroni appeared on Stefano Torossi’s Musica per commenti sonori (CO 10010) LP for Costanza Records. Alessandro Alessandroni arranged and conducted the choir on the album of Torossi compositions.

Stay tuned for a closer look at this long out-of-print, never reissued LP.

The Sandro Brugnolini album for a 1967 crime film by director Sergio Spina, Fantabulous Inc., was never properly released by the Beat Records Company despite receiving a catalog number (BEAT LP 002). The soundtrack composed by Brugnolini is an eclectic mix of pop, jazz, and the the swinging sounds of the period and contains an infectious vocal performance by Gepy that this correspondent is completely hooked on.

The full film is also currently available online. Any search engine should do the trick.

Gianni Ferrio’s original soundtrack for director Steno’s 1974 comedy La Poliziotta (known internationally as Policewoman) was released on vinyl by RCA. At this time, it seems only one cut from the jazz-funk album is online. 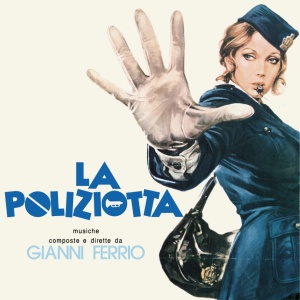 Gianni Ferrio’s “Step By Step,” the sixth track on the first side of La Poliziotta is on SoundCloud:

More info about the latest Four Flies Records‘ releases is found on their BandCanp page. 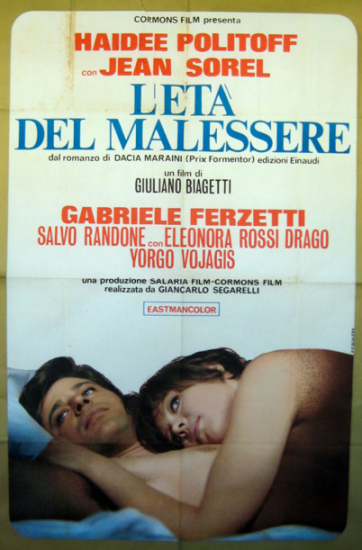 An EP that contains all the videos for the film soundtrack of Giuliano Biagetti’s L’età del malessere (The Age of Malaise) currently found online is on YouTube:

NOTE: This Spotlight on Stefano Torossi’s L’età del malessere was first published 16 March 2014. This upgraded version adds newly uploaded video tracks as well as updating some of the original content.